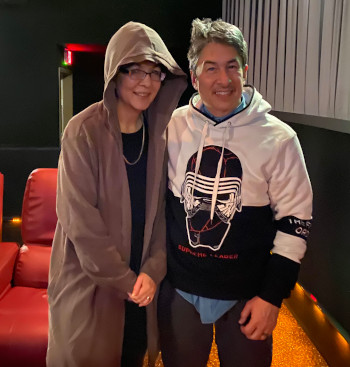 Joanna in her Jedi hoodie and Maki in a Supreme Leader sweatshirt at the Star Wars Episode IX opening night.

It’s no secret that I’m a huge Star Wars fan. Yeah, sure, maybe there was an episode (or two) that wasn’t as great, but by and large, I’ve loved everything about the franchise. I’ve also read a lot about how George Lucas was highly influenced by Joseph Campbell’s mythical framework during the making of Episode IV: A New Hope. Star Wars is not science fiction. It’s space drama and space mythology.

Last night, I got to watch Star Wars Episode IX: The Rise of Skywalker. Prior to opening night, I rewatched a bunch of the older movies and wondered if there are life lessons for me, as CEO of Matrix Group. Here’s what I came up with:

Culture must be nurtured and renewed on a regular basis. During the life of the Star Wars franchise, we’ve seen republics and empires rise and fall. I’ve been thinking a lot about how my company, Matrix Group is now 20 years old. About every five years, we have to undergo a shift (in technology, structure, process, you name it) in order to keep the company feeling fresh, youthful and invigorated. Sometimes, this process has been painful. Other times, it’s been just what we needed. After 20 years, I now try to direct this process and make it as intentional as possible so that our culture never feels stale, lumbering or forced.

Not Everyone Needs to be a Jedi

The Jedis might be the rock stars, but everyone plays a role in making a galaxy great. While watching The Last Jedi this week, I thought about how Luke Skywalker was the guy who gave the Resistance hope and was responsible for some amazing theatrics, but every woman and man in the Resistance, down to the janitor and the plane mechanic had an important role to play. Knowing this, I try to be grateful to everyone in my company because while the senior consultants and designers get the high praise for their strategies and designs, lots of people work to get a website or mobile app launched, including the guy who ordered pizza during a Thursday night launch.

Laughter Gets You Through a Lot of Stuff

Sometimes, laughter and some campy jokes are what will get you through a project. There’s a scene in The Last Jedi where Luke and Leia reunite after Luke’s long absence. Luke looks like he’s goign to apologize for going missing or for whatever the heck he did to create Kyle Ren. Leia says, “I know what you’re going to say: You’ve changed your hair.” It’s so wonderfully campy and so Star Wars. There are times during long strategy meetings, extended launches, or problem-solving meetings where we’re all strung out and what we really need is a good laugh. Which is why we booked a whole theater to see The Rise of Skywalker. December is usually a busy time for us, with lots of launches and people out because of the holidays. But you know, you gotta come together, laugh at some campy Star Wars jokes and share a common experience.