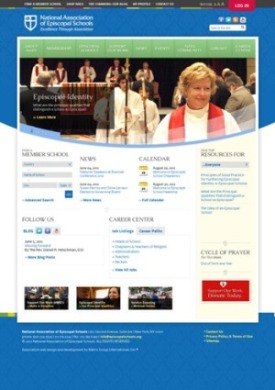 The National Association of Episcopal Schools (NAES) is an independent, voluntary membership organization that supports, serves, and advocates for the vital work and ministry of 1,200 Episcopal schools, early childhood education programs, and school establishment efforts throughout the Episcopal Church.

NAES wanted to redesign its website to enhance the value of its membership, promote the unique character of an Episcopal education among the general public and communicate its new, fresh identity.  As part of the website redesign, NAES wanted to add more functionality to the website, allowing members to register for events, make donations online, have more access to online resources, and participate in thoughtful discussions.

To help make their vision into a reality, Matrix Group: