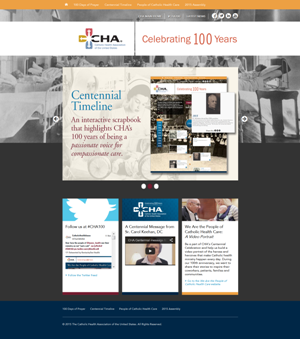 Representing more than 600 hospitals and 1,400 long-term care and other health facilities in all 50 states, the Catholic Health Association of the United States (CHA) represents the largest group of nonprofit health care providers in the nation.

This year, the association is celebrating its 100th anniversary. In honor of this milestone, CHA launched a centennial campaign.

As part of the campaign, CHA wanted to create a special anniversary microsite that showcases its rich history; highlights individuals of the industry and invites members, partners and other visitors to join the celebration.

Matrix Group partnered with CHA to create a special microsite. The website features: