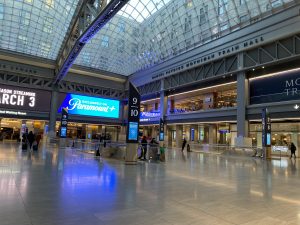 I never really stopped traveling during the pandemic. Yes, I traveled a whole lot less, but I have seen my mom several times, I went on vacation, and I have attended out of town conferences. Just since the start of the New Year, I’ve been to San Diego, San Francisco and New York.

Whenever I come back from travel, friends and co-workers ask me, “what’s it like to travel these days?” This post is for all of you who have been wondering what it’s like to get on a plane or train, stay in a hotel, or attend a conference or show. Here’s what I have observed and learned, in no particular order.

So what’s it like to travel these days? On the whole, it feels great. Since last July, I’ve been to Santa Fe, Boston, Nashville, San Diego, San Francisco, and New York City. I’m a pretty careful traveler. I wash my hands a lot, I mask up, and I carry wipes, hand sanitizer, and extra masks. When I can, I eat outdoors. Even though I’ve never tested positive, my household has had COVID, so the existential fear of COVID that loomed before me is now mostly gone.

This post is not about whether or not I think life is, or should be, back to normal. For the record, I don’t think either is true. It’s about travel, which for me, has been pretty joyous and safe. If and when you do decide to travel, be safe, be well.