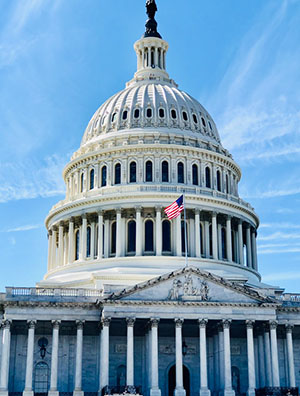 On January 20, I watched the Presidential Inauguration celebration from my couch. Normally, I would have been jonesing over the inaugural balls I’ve never been invited to, but this year, I had a front row seat as Tom Hanks hosted a star-studded musical extravaganza. How amazing to see John Legend, Justin Timberlake, Bruce Springsteen, Yo-Yo Ma and Katie Perry (among so many amazing artists), and I loved that ordinary Americans got to introduce these stars.

I felt the same during the Democratic National Convention last August. Yeah, sure, every Democratic and Republican convention is televised, sort of. You can watch on C-SPAN, or catch highlights on network or cable television, but this coverage always seemed so cold and distant, like an afterthought. Last year, the Convention went virtual. Remote viewers were the main audience and boy were we treated well. It felt like we joined Michelle Obama in her office. And the state roll call, normally a dry and pompous affair, became a celebration of America as delegates, parents, teachers, small business owners, essential workers, activists and elected leaders cast their states’ votes to nominate Joe Biden. Three delegates from California were on a beautiful bluff, the delegate from Alabama was on the famous Edmund Pettus Bridge, tribal members from states with large Native American populations announced their states’ votes, and on, and on. It was glorious! And I got to be part of it! We all did!

Four years from now, presumably most Americans, indeed citizens of the world, will have been vaccinated and in-person events will once again become the norm. Will we go back to the exclusive conventions and balls of the past? Will I once again sit on my couch and wonder how I could have gotten myself invited to an inaugural ball? I sure hope not. The pandemic has broadened the reach of these events, and allowed ordinary citizens to be part of the proceedings, the events and the fun.

While I am dying to see my family and friends, meet with clients, and travel on vacation, I hope we don’t go back to the way things were. I hope we figure out how to continue to make our events more accessible to everyone.