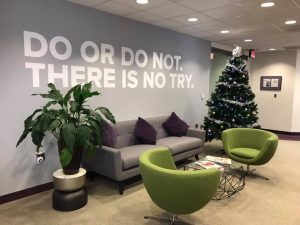 I did fret a little, however, about onboarding these new staff. Before the pandemic, ¼ of the Matrix Group was already remote, but they were all staff who had previously worked in the office and then moved away for a variety of reasons. These were team members who were inculcated in the Matrix Group ways, they had deep networks, they had strong ties to their managers and teams.

Turns out that something we’ve been doing for a looooong time has served us well as we’ve hired and onboarded staff who may never set foot in the Arlington, VA office.

Matrix Group has company fundamentals. These fundamentals are 23 rules to live by that we developed eons ago. Here are some of my favorites:

Back to onboarding. Turns out these fundamentals do more than serve as something to talk about. They give staff guidance on how to behave, they let us tell stories about how we’ve lived or violated the fundamentals, and they give my team common language about what’s acceptable and what’s accepted at work.

Once I realized this, I spent a whole lot less time fretting about whether or not my remote staff would “get” the Matrix Group company culture. I smile when I hear someone fairly new at the company start to use the company fundamentals in their communications. I love it when I hear or read, “I know we’re not supposed to let clients make a mistake,” or “I know we’re not supposed to deliver bad news via email.”

How about you? How are you defining your company fundamentals for new or remote staff? What’s working?