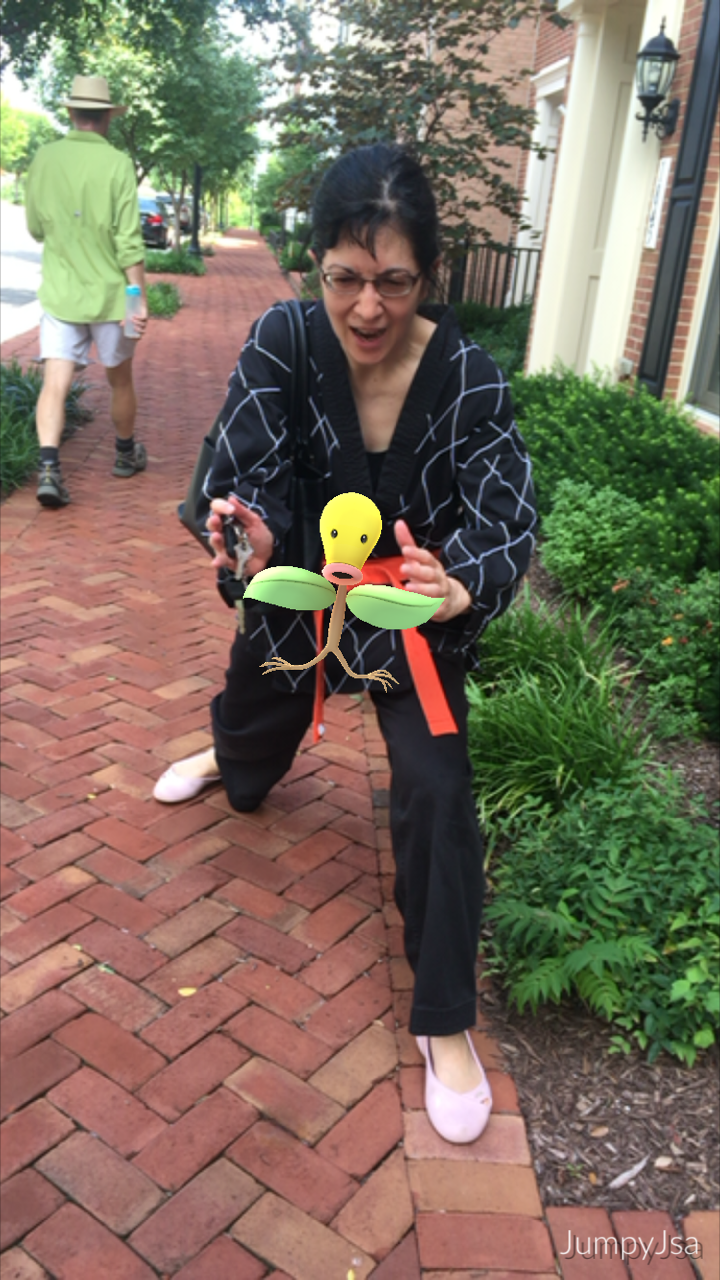 Here I am, catching a Bellsprout Pokemon in my neighborhood.

Unless you’re living under a rock, you’ve heard about Pokémon Go. Pokémon Go is an app that lets you use your phone’s GPS and clock to detect where you are in the game and make Pokémon “appear” in your physical world so you can catch them, level them up, and battle your Pokémon against other Pokémon. It’s an augmented reality version of the Pokémon games on the Nintendo devices (e.g., Nintendo DS, GameCube, etc.) where players run around, catch Pokémon, level them up and battle against other trainers and their Pokémon.

Pokémon Go is the brainchild of Google spinoff Niantic, which is based in San Francisco. Niantic partnered with Nintendo, the creators of Pokémon, to create Pokémon Go. The Niantic connection is an interesting one and very telling. When you play Pokémon Go, you are presented with a map of your surroundings; this map data comes from Google Maps and Google Earth. When you run around looking for gyms and Pokéstops, you’re really looking for Ingress portals. Ingress is the other blockbuster app created by Niantic several years ago. Here’s a fascinating story about Pokémon Go’s mapping service on Mashable.

Anyway, my son heard about the game through YouTube and asked his dad to download the app the minute it became available in the US last Thursday, July 7 (the game was released earlier in Australia and New Zealand the day before, God only knows why). Trouble was, CJ could not get connected to the server. And no wonder, Pokémon Go topped the US App Store “Top Grossing” list within 24 hours of its release. I finally got him connected on my iPhone on Friday night and he begged me to go outside with him to go hunt Pokémon. We were supposed to watch a movie at home, but what the heck, it was an opportunity to be outside on a beautiful summer evening. My two sons and I ended up staying outside for nearly an hour as we hunted Pokémon all over our neighborhood.

The next day, CJ could not contain himself. At every opportunity, he was running around the neighborhood, looking for and trying to catch Pokémon, getting Pokéballs and other gear at Pokétops, and doing battles at a “gym” in our neighborhood. On Sunday, he begged me to invite some friends over for an afternoon of Pokémon. By 1pm, two of his best buddies were over and they were outside until 6:30pm. Armed with water bottles and slathered in sunscreen, they went tromping all over the neighborhood for more than five hours! Five hours! Normally, they would have been parked in front of YouTube or Minecraft and I would have had to beg them to spend a little time outside.

Monday was more of the same. CJ and two friends spent pretty much  all day outside, catching Pokémon and doing battle. I sure enjoyed their shrieks as they caught Legendary and Rare Pokémon. The restaurant in my neighborhood was the scene of many battles and depending on which team won a specific battle, that gym turned blue, yellow or red.

Yep, the news is already full of the scary stuff associated with Pokémon Go, including gangs using “lures” to attract Pokémon Go users, people walking in front of cars, and a girl finding a dead body. Yep, I have duly lectured the boys on street safety, not falling prey to “lures” where a crowd is gathering, keeping their stranger danger antennas up, and checking in with the adults in charge of them that day every couple of hours.

But this mom loves, loves, loves that Pokémon Go is getting my son excited about being outside. He’s walking, walking, walking because the eggs he found need to be incubated, and you can only incubate eggs by walking; the app can tell if you’re in a car by the speed of your travel. Nice! He’s running because that Gengar down the street might be gone anytime. And he’s interacting with his friends, not via chat, but in person. Imagine that!

Pokémon Go is so fun that I’m thinking of starting my own account and going hunting with some mom friends. CJ says I need to be on the blue team. My avatar will definitely have spikey, purple hair.

Want to know more about Pokémon Go? Here are some good resources:

3 thoughts on “Why This Mom Loves Pokémon Go”